Records and Ronaldo go hand in hand. If there’s anything that the Portuguese superstar loves more than making new records is breaking set records.

Real Madrid welcomed Cristiano Ronaldo as a member of their Galactico signings back in 2009. And he made sure to write his name all over the Spanish capital before leaving it. The number 7 made scoring goals look like a child’s play. He did it for fun. Ronaldo’s mouthwatering statistic is a testament to that. 450 goals in 400 games is quite staggering by any standards. The numbers he put up while wearing the famous white jersey looks to stand the test of time.

The Portuguese won every single plausible silverware in Real Madrid colors. He has been unable to replicate his glistening club career with the national team. Although, that’s not to say Ronaldo has not shown his quality and brilliance with Portugal. 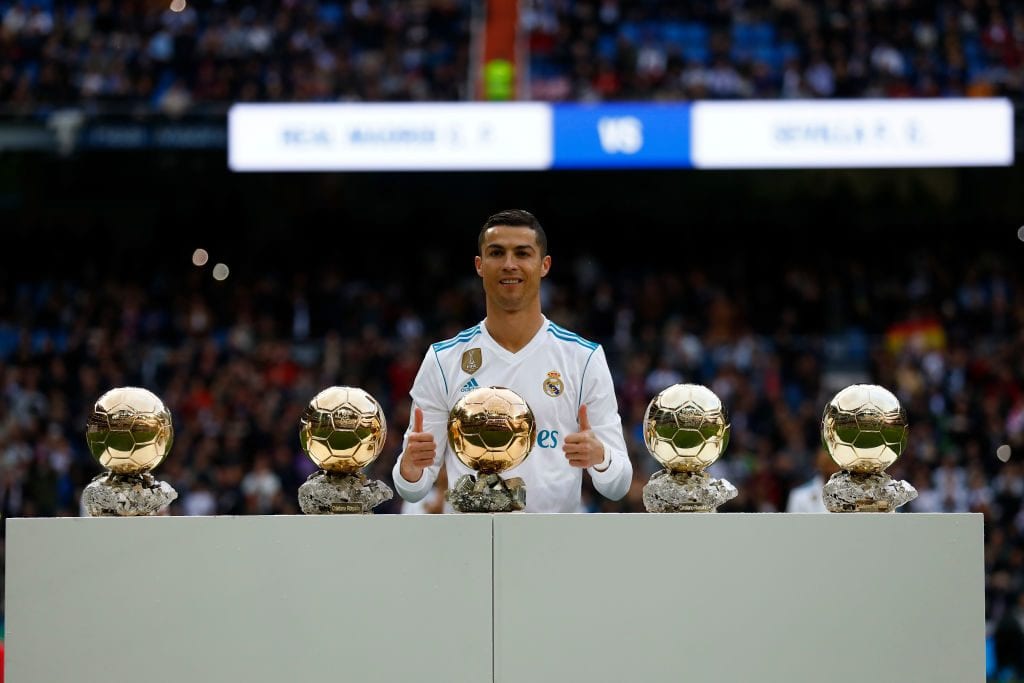 Cristiano Ronaldo won’t stop breaking records. And he’s approaching another as he looks to add two zeroes to the end of CR7 for his 700th career goal. We take a look at the 5-time Ballon d’Or winner’s ten most impressive international records:

10. Most international goals for Portugal

Age is just a number. And Ronaldo is its living justification.

Cristiano Ronaldo scored his first goal for Portugal in 2004. The goal came in a 2-1 defeat to the eventual EURO champions Greece. Since then, the Portugal captain has scored 94 goals for his country. He has also managed to win a couple of accolades for the Selecao.

9. Most international hat-tricks for Portugal

The Portuguese scored 3 goals in a match only once for Manchester United. But Cristiano Ronaldo made it a habit at Real Madrid. Scoring even 54 career goals is a tempting thought for most players.

Cristiano Ronaldo has scored 54 hat-tricks in his lustrous career. He scored eight of his hat-tricks while wearing the Portugal shirt. While the other 46 has come in his club career.

Now @Cristiano Ronaldo has the joint most international hattricks in history alongside with Ali Daei.👑 🐐 pic.twitter.com/Td3mPdIfYt

8. Only player to score in four different European championships

The biggest factor of Cristiano Ronaldo’s massively successful career is his ability to be consistent. The Juventus forward has scored at the 2004, 2008, 2012 and 2016 UEFA Euro Cups. This feat makes him the only football player in the world to have scored in four different European tournaments.

Most European Championships tournaments scored in: 4

Only player to score three goals in multiple European Championships

7. Most FIFA World Cups scored in

Cristiano Ronaldo makes sure he stands the tallest not only in Europe but at the world level too.

Ronaldo is yet to land the World Cup for his country. But he has not failed in being decisive for them in the moments that matter.

The Portuguese international is one of the four players to have scored in four separate FIFA World Cups. He was able to find the back of the net in 2006, 2010, 2014 and 2018 editions.

6. Only player to score in ten consecutive international competitions

A player of Ronaldo’s caliber does not shy away from any challenge presented to them. The fact that Cristiano Ronaldo keeps breaking records highlights his focus on being at the very top.

Cristiano Ronaldo has scored in 10 consecutive international tournaments over 15 years.

5. Most goals by a European player in international football

Cristiano Ronaldo is the European player with most goals in international football. Currently, he has 94 goals to his name.

Ronaldo is only second to Iran’s Ali Daei in most number of international goals. The ex-Madridista is only 15 goals short of being the international top scorer. He will be keeping his eye on the prize in the upcoming competitions.

4. Most different national teams scored against

On Saturday, Cristiano Ronaldo scored his 94th career international goal to seal a 3-0 win aginst Luxembourg. But Luxembourg is not the first team to be subjected to Ronaldo’s demolition. And they almost certainly will not be the last.

He has now scored against 40 different teams while playing for Portugal.

3. Only player to score three goals in multiple EURO Cups

Cristiano Ronaldo’s desire to be the best in the world at everything he does is what sets him apart from others.

Ronaldo has scored in the 2012 and 2016 European champions. This makes him the first player to score at least three goals in multiple EURO competitions.

2. Most goals in EURO Championship finals

The Juventus ace shares the record of scoring the most number of goals in European championships with French legend Michael Platini. Cristiano Ronaldo scored the first goal against Wales in the Euro 2016 semi-final to level with Michel Platini with nine strikes each.

1. Oldest player to score a hat-trick at a FIFA World Cup

Scoring a hat-trick at a World Cup match is a dream for many players.

At the 2018 FIFA World Cup, Cristiano Ronaldo scored thrice against Spain to avoid Portugal from suffering a defeat. It was a titanic performance from Ronaldo. A one-man show from one of the world’s best player, on the biggest stage of all.

At 33 years and 130 days, Ronaldo became the oldest player to score a hat-trick in a World Cup.