Jurgen Klopp has sent the internet into meltdown with fits of laughter after video emerged of him reacting to Pep Guardiola entrance at a UEFA conference.

Following the most intense battle of the Premier League season so far between Jurgen Klopp’s Liverpool and Pep Guardiola’s Manchester City, there was still time for some humor.

The game was a battle with arguably two of the best manages in football right now, who have nothing but respect for each other.

Klopp and Guardiola were animated with intensity and fight as their teams battled for supremacy at the top of the league table on Sunday.

This could be the greatest gif this season… Caption it 🤣#Guardiola #Twice pic.twitter.com/my4WP8gi6z

However today they were just couple of coaches brought together by UEFA to discuss the beautiful game.

Klopp was being interviewed upon his arrival he admitted to talking to his nemesis on a regular basis.

“Yes, of course, we (Pep) spoke. Why shouldn’t we speak? We speak constantly.”

As the interview progressed, who among all people should enter the room, but none other than Guardiola himself.

Klopp caught a glimpse of him and abruptly and hilariously in a fit of laughter, said:

He turned and scarpered.

Liverpool manager Jurgen Klopp was left confused when a reporter asked him if he had spoken to the Manchester City boss at a UEFA coaches' conference…🤪 pic.twitter.com/En6OFiWNef

His hilarious almost pantomime like reaction to Pep’s arrival has sent the internet into meltdown. The Daily Mail reported some of the fan’s reactions to this viral video. 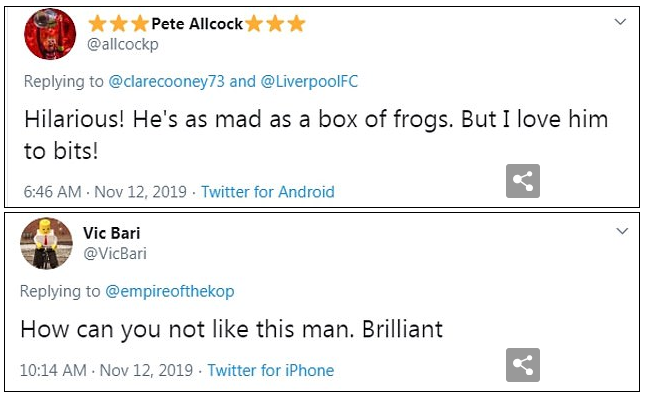