Surprisingly European, Kazan is one of the best World Cup 2018 destinations.

Kazan Arena is one of the rare World Cup stadiums that was completed earlier. The venue was finished in 2013, at which point it became the new home for Rubin Kazan. The total cost is estimated at €215 million. It has since hosted the 2015 World Aquatics Championship, with pools installed inside the stadium especially for the event, as well as matches during the 2017 Confederations Cup. The stadium has one of the largest media facades in the world that includes three huge HD screens. The design was made so it would resemble a water lily when seen from above. Its location on the banks of the Kazanka river enables the creation of some magnificent photos from outside the stadium. 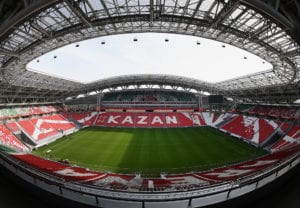 Unfortunately, Rubin Kazan has not been doing so well lately, leaving most of the 45.000 available seats empty. The bad blood between the stadium owners and the club has had its adverse effect too, putting the profitability of the investment in doubt. The hope is that this World Cup will light a spark in the people in and around the club, forcing them to come to an agreement and sway the club back in the right direction. A total of six games this summer will take place at Kazan Arena.

France, Spain, Germany and an exciting encounter between Poland and Colombia. That’s the summary of the enticing group stage Kazan visitors. France should come back for a second visit as the winner of Group C during the Round of 16.

The 1.2 million city of Kazan is one of the most advanced cities in Russia after Moscow and Saint Petersburg. The capital of Tatarstan is a place of culture, tradition, diversity and education. It gathers over 180.000 students and over 100 nationalities. It preserves Tatar culture, features mosques and churches and has a unique architecture that captures its rich 1000-year-old history. Having been there myself a couple of years ago, I can say that Kazan doesn’t lag behind the best European cities. It is clean, well-organized, cars have no access to the main streets, the museums are worth visiting and there’s plenty to see. Fans and visitors will be surprised by what Kazan has to offer and will enjoy this city as much as any other hosting the World Cup.